Home / Health / When the surgeon forgets compresses and other textiles

When the surgeon forgets compresses and other textiles 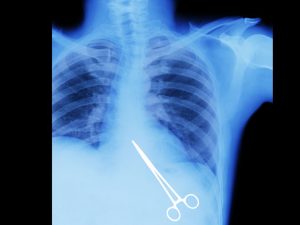 Japanese surgeons described in February 2017 in the Clinical Journal of Gastroenterology the case of a 67-year-old woman, anemic, presenting an emission of blood by the anus. The CT scan appears to show the presence of a 6 cm tumor with the presence of an abnormal communication (fistula) between this mass and the adjacent intestine. The surgeons operate on the patient.

They remove the lesion and the colon passes through. Microscopic examination of the suspicious mass shows that it contains fine cotton residue. This patient had undergone a hysterectomy (removal of the uterus) for a fibroid 24 years previously. The surgeon had therefore forgotten a woven cotton drape. These absorbent surgical drapes are used as sponges during surgery to stop the bleeding.

They also provide protection for the organs adjoining the one on which the surgeon works with his scalpel, Doyen abdominal retractors 25 cm and other instruments.

In January 2017, Greek surgeons reported in Urology Case Reports the case of a woman who lived for 29 years with a cotton-woven drape forgotten during a cesarean section. Aged 68, she is seen in the urology department of an Athens hospital because she is completely unable to urinate even though she has a full bladder.

A bladder catheterization is performed to overcome this acute urinary retention. It allows the rapid evacuation of half a liter of urine. An ultrasound of the urinary tract is performed. It shows a moderate increase in the size of the left kidney as well as the presence of a lump in the left part of the small pelvis that pushes the uterus and bladder forward.

Doctors suggest an ovarian or intestinal tumor. The CT scan shows the presence of a 12 cm diameter mass which, after opening the belly, will turn out to be a woven drape placed 29 years earlier near the left ovary during a cesarean operation. It is very difficult for surgeons to remove the cotton woven drape as it adheres so strongly to the intestine.

Also in January 2017, American surgeons at the Mayo Clinic in Rochester, Minnesota, reported in the journal Cardiovascular Pathology the case of a 62-year-old man complaining of a respiratory gene on exertion. He had undergone heart surgery 25 years earlier.

He had his failing mitral valve replaced with mechanical valve prosthesis and a pacemaker implanted. Based on the echocardiography and CT images, it was decided to replace another heart valve, the tricuspid. During the procedure, surgeons find a mass adhering to the wall of the right atrium. This foreign body, partially calcified, has a fibrous texture. Its examination under the microscope shows that it is about a surgical site forgotten 25 years ago during the replacement of the mitral valve.

Chinese surgeons reported in January 2017 in the Word Journal of Surgical Oncology the case of a 32-year-old woman hospitalized with intermittent abdominal pain for a fortnight. The CT scan shows the presence of an ill-defined mass in contact with the small intestine and colon.

It is decided to intervene surgically by making a minimal opening of the abdominal wall (laparoscopy). Surgeons discover a mass of 6 cm by 5 cm. It adheres so strongly to the sigmoid colon and small intestine that they cannot remove it. They then proceed to open the abdomen through a large incision (laparotomy) only to find that the mass was nothing but a field woven of cotton.

Three-quarters of textile are secondary to digestive or gynecological surgery.

Compresses and sponges in the skull

Textiles forgotten in the cranium are rare. However, Moroccan surgeons have described a case of intracranial textile, in this case a piece of compress forgotten in a patient operated on three years previously for a tumor near the orbit (spheno-orbital meningioma).

American authors reported in 2004 five cases of textile simulating, within 7 months following a neurosurgical intervention, a recurrence or progression of an intracranial tumor according to magnetic resonance imaging (MRI) images. The neurosurgeon had forgotten a textile used to control bleeding, what specialists call a surgical hemostat. These absorbable devices, composed of collagen, come in the form of compresses or sponges. One of the five patients with textile also had a recurrent tumor.

Cases of textiles located near the spine have been reported. In 2010, Moroccan neurosurgeons described a case of textile in a woman who had surgery on her back three years earlier for a herniated disc. The surgeon had forgotten a compress, visible on the CT scan as a mass of 4 cm by 2 cm, located between the muscles surrounding the lumbar vertebrae.

There have been reports of forgotten textiles in the thorax. Turkish surgeons described the case of a 15-year-old girl in whom a surgical drape was discovered in a lung cavity filled with pus. This young patient had been operated on two years previously for a parasitic infection of the lung (hydatid pulmonary cyst).

Forgetting a woven drape during surgery is a rare complication in orthopedic surgery. Symptoms associated with a limb textile may not appear until about 10 years later. Tunisian surgeons recently reported the presence of a textile in a woman who had had her breast removed four years earlier for invasive breast cancer. Finally, very recently, a case of textile simulating a kidney tumor was described by Senegalese doctors.