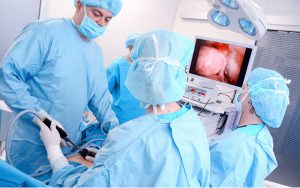 Background: Surgical simulation is increasingly important in surgical education. However, the simulation method to be incorporated into a surgical curriculum is not clear. We compared the effectiveness of competency based pre-simulated

Materials and methods: In this individual trial, 30 final year medical students were randomized in three groups, which was different from how they were exposed to laparoscopic simulation training. The control group received only clinical training during residency, but the interim group received clinical training in conjunction with simulation training. The Pre-Logical Training Program Group of Surgical Technologies (CST PTP) received a competency based preliminary simulation course during the final year of medical school but did not disclose any further simulation training during surgical residency. After 6 months of surgical residency, the impact of the learning curve and five human laparoscopic cholecystectomis were assessed in succession by movement tracking, time, World Workers Assessment of Laparoscopic Skills, and the number of adverse incidents (gall bladder seizure), bleeding, and damage to liver tissue).

Results: 4.5 (95% confidence interval) and 3.9 (95% confidence interval 1.5–9.7) times were lower for the PTP PTF group compared to the control and interval groups. In terms of time, correction time, movements, footpath length, and World Workers’ Assessment of Laparoscopic Skills, the PTP trainees continued to perform at a better level and the other trainees were never better. 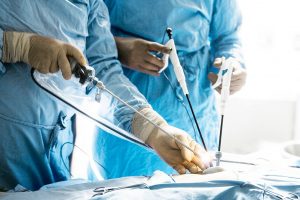 The apprenticeship-tutor model has been useful for training surgeons for many years, but the complexity of surgical technology in the 21st century has resulted in exponential demand due to increased use of laparoscopy, endoscopy and robotics as well as the restriction of working hours. surgical skills training outside the operating room. Many research articles provide evidence of the value added of simulation. There is insufficient evidence to demonstrate the general portability of skills from the laboratory to the live functional setting; however, a very recent study showed that a curriculum of individual deliberate practice on a virtual reality simulator improves technical performance in the operating room. In addition, a week of simulation training appeared to have a positive clinical impact on the performance of the operating room. the transfer from student to intern .

However, most of the studies focused on a specific simulator or a specific laparoscopic task or procedure.

Despite this data, when different training models and training systems were used, the best way to incorporate simulation training into a surgical curriculum is not yet clear.

The most common way to integrate simulation into the surgical curriculum worldwide is to offer several days simulation training during surgical residency. This type of training is called interval simulation training. Some centers organize pre-simulated structured training for examination before surgery commences. An example of this is validated Laparoscopic Surgery.

However, the ultimate goal of a simulation program is to show portability to the clinical setting, which means that real performance, must be improved after simulation training.

The objective of this pilot study was to compare the impact of interim preliminary simulation programs and competence on laparoscopic cholecystectomy learning curve for the life of first-year conceptually trained residents with no simulation training.

We conducted a one-blind trial in and affiliated hospitals. This study was approved for Masters in Medicine. The approved the use of animals for training. Each experiment was conducted after and national guidelines and regulations. Informed student consent was not sought as this training program was part of their curriculum and all students agreed.

Final year students of medical school and applying for surgical residency in the academic year followed by standard intraoperative learning based on residency through mentoring (control), collaborative learning through mentoring with three sessions of simulation training 6 times a year. hours (18 hours in total) in laparoscopy skills laboratory (interval) during his residency, or laparoscopy precursor training as a student after the 10 course of the Pre-Logical Training Program (CST PTP) of the Institute of Surgical Technologies ( CST PTP) (totaling 18 hours) before 6 months after commencing their residency.

30 final year medical students (23-26 years) were recruited without a laparoscopic training experience earlier for this study. Each student was allocated to three groups of study have enabled spatial test, handling , and basic laparoscopic psychotherapy (drills southwest) .  Instead of pure randomization, students from the same clinical study the group was kept together. No simulation training, other than that corresponding to their study group, was approved until the end of this study. The standard simulation training was not included in our residency program at the end of the study period.