Cesarean section is a surgical procedure performed with the help of delivery surgical instrument set when vaginal birth is not possible or when it risks endangering the health of the child and / or the mother-to-be. It can be either programmed in advance during pregnancy or decided urgently during childbirth. 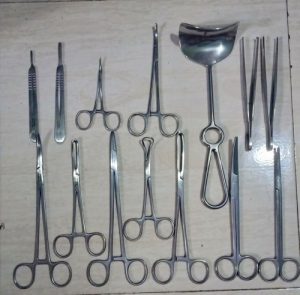 It is a surgical procedure that involves extracting the baby through a transverse incision at the pubic level. Perfectly mastered, it is performed under loco-regional anesthesia, which allows the mother to be fully aware and the father to be present.

Certain medical elements may endanger the health of mother and child and make a vaginal birth impossible. They may cause the obstetrician to schedule a cesarean delivery in certain situations:

Intrauterine growth retardation (IUGR): the medical team may choose to deliver the child with IUGR well before term to give it the best chance of improving its vital prognosis and of developing in an incubator, closely monitored by neonatal teams

Macrosomia: when the baby is too big and there is a foeto-pelvic disproportion, an incompatibility between its size in relation to the mother’s pelvis

Multiple pregnancies: when there are several babies

Presentation of the baby: certain breech, face or shoulder presentations may lead to planning a cesarean section

Placenta previa: a low inserted placenta can block the passage and may cause hemorrhage and fetal distress. This is why in 75% of cases, pregnancies with placenta previa result in deliveries by cesarean section.

Ovarian cyst or uterine fibroid: in some cases their presence can make it impossible to give birth by natural means

The scarred uterus: a history of cesarean sections or gynecological surgeries can weaken the uterine muscle and be contraindications

Maternal illnesses: hypertension, diabetes, heart disease may necessitate a caesarean section. Similarly, delivery by cesarean section is essential in the presence of viruses such as genital herpes or HIV in the mother, to avoid contamination of the child

The decision for this intervention must always be made on the basis of the balance of benefits and risks for the mother and the child. She needs to be discussed with the mother-to-be so that the doctor can explain to her why the Caesarean section is necessary and that she has time to come to terms with it.

Cesarean section can be decided on urgently during childbirth when there is:

Maternal illness: a mother with heart disease, for example, can become exhausted during a normal childbirth that is too long. This may cause the healthcare team to end the delivery with a cesarean.

2021-02-12
dmt1
Share
Previous How to create an outfit that is both chic and comfortable?
Next Women’s fashion on Shurooq: quality items for all women