A route first refers to the route used to access the organ or area to be operated on.

Three main routes are used to operate for cervical cancer: laparotomy, laparoscopy and the vaginal route. 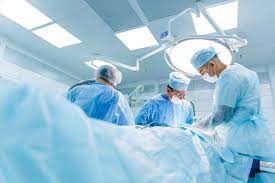 Performed under general anesthesia, laparotomy requires fasting. In order to access the injured organ, the surgeon makes an incision in the skin, muscles and peritoneum. This can take various forms: horizontal, cesarean or oblique. After the exploration, the wound is carefully closed. The installation of a drain is necessary to ensure the flow of liquids.

Loco regional anesthesia may supplement general anesthesia to reduce pain upon waking. For this purpose, the epidural is injected before falling asleep. The duration of hospitalization can take several days depending on the nature of the operation.

After the operation, medical follow-up is required.

Unlike laparoscopy, laparotomy is a more delicate alternative due to:

You should know that laparotomy causes an arrest of intestinal transit, known under the name of “postoperative ileus”. This condition generally stagnates for two days, after which time conventional feeding can be resumed. If this phenomenon continues after 3 days, it is paralytic ileus.

Laparotomy involves opening the abdomen with the help of laparotomy surgery instrument set. It is also referred to as an open stomach operation. The surgeon makes either a vertical incision (often from below the navel to the pubis) or a horizontal incision above the pubis, the scar of which may be hidden by pubic hair. Laparotomy allows the surgeon to carefully observe and palpate the abdominal cavity before removing the uterus and, if necessary, the lymph nodes near the uterus.

Laparoscopy (or laparoscopy) is a more recent surgical technique. It is also called closed stomach operation. Instead of opening the abdomen, the surgeon makes three or four small incisions that allow him to insert an optical system, as well as surgical instruments, inside the pelvis and abdomen. The optical system is connected to an external screen and the surgeon operates by visualizing his gestures on the screen.

Laparoscopy is as effective as laparotomy in removing the uterus and lymph nodes. It has several advantages such as reducing pain and complications after the operation, reducing the length of hospitalization or preserving the abdominal wall with aesthetic benefit (small scars). Laparoscopy is increasingly used in surgery for cervical cancer.

The vaginal or vaginal route consists of accessing the tumor by natural routes, passing directly through the vagina. The main limitation of this route is the inability to remove the lymph nodes.

The choice of which route to take depends on the characteristics of the cancer (size and location of the tumor), as well as the habits and experience of the surgical team.

Comprehensive Training in Prevention and Intervention in Addictive Behaviors

Degree In Addictive Behaviors and Personal Transformation In recent years, the problem of addictions has …